Moanoghar is a non-political and socio-educational and development organization, located in Rangapani village in Rangamati of the Chittagong Hill Tracts (CHT) in Bangladesh. In the aftermath of the Liberation War of Bangladesh, the entire region of CHT was affected. The lives of the ethnic indigenous communities living there were totally disrupted.

Many children were left orphaned and destitute and so Moanoghar was founded in 1974. It became the ideal institution to provide refuge, to house and educate the children who were mere victims of the strife.

In the ensuing decades when the region descended into a period of political instability which seriously disrupted the lives of the region's ethnic indigenous communities, Moanoghar was established as an ideal institution to provide refuge to hundreds of children who were victims of the strife.

Moanoghar is a Chakma word. Its literal meaning is ‘hill home’ constructed in the jum (shifting cultivation) field. ‘Moanoghar’ is a house to protect the jum crops from the attack of wild animals and birds. It is also used as a shelter house for the jumia farmers to take rest and save themselves from the rain and sun. Jum harvests are first collected in the ‘moanoghar’. In the end of harvests, the jumias with rice and other jum crops, return to their respective homes back in the village. In analogy with these phenomena of the jumias’ life and reality, this institution was named Moanoghar.

The founders envisioned that like a jum field, Moanoghar would be a centre of unity in diversity; where children from all communities of the CHT and beyond would come for education and glean knowledge. Being equipped with knowledge, they would return to their own respective homes in every nook and corner in the hills; where they would be acting as the torch-bearers in their communities. 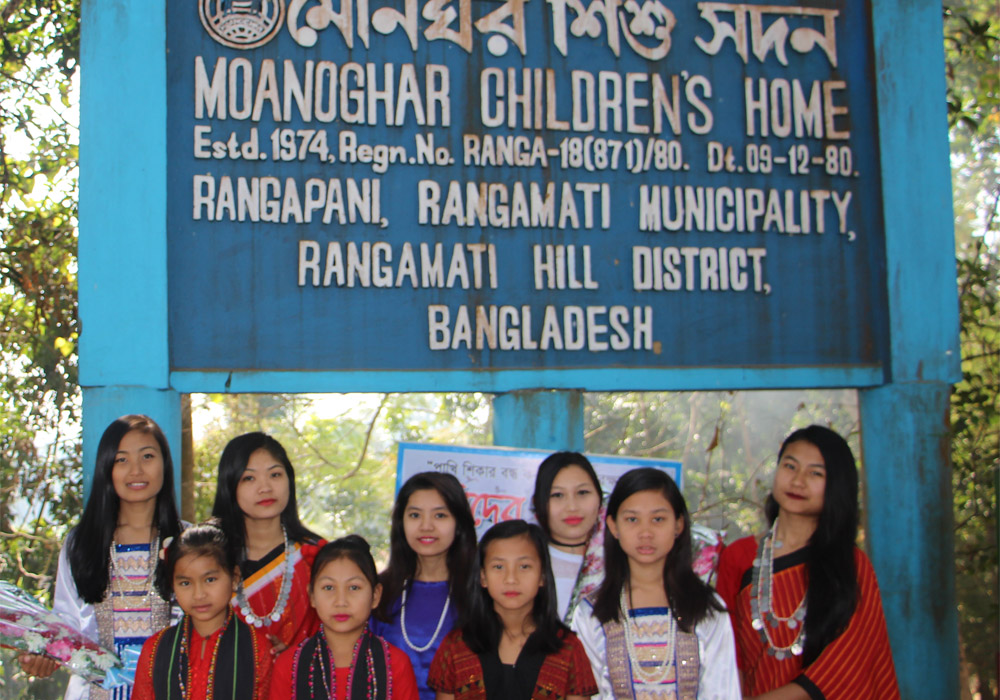 Our vision is of a society in which the disadvantaged and marginalised communities of the Chittagong Hill Tracts have access to the basic services necessary to give them a secure future and in which the various cultural traditions of its people can be shared and cherished.

Moanoghar's mission is to work with the poor and marginalized indigenous people of the Chittagong Hill Tracts (CHT). Moanoghar works to provide formal education, vocational training, health services and support for the overall socio-economic development of its students in the area and of the wider community. In addition to these priorities, Moanoghar aspires to promote and preserve indigenous culture and to act as a symbol of communal harmony to the wider community.